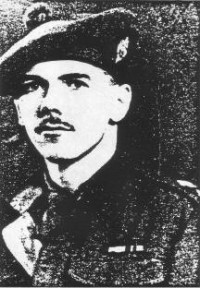 At the start of the Battle of Hong Kong in 1941 I was a Private in Number 1 Company of the Hong Kong Volunteer Defence Corps helping to defend Kai Tak Airport.

By the 18th December we had withdrawn to the Island and were manning the Tai Tam Gap. That afternoon our OC Captain A H Penn told Private Sweetenham and myself that we were being commissioned as second lieutenants and posted to 2nd Battalion Royal Scots to replace officer casualties. The next morning we were each given a Platoon and sent to do battle. Sweetenham was killed a few days later. A week later I was the only officer left in A Company and so became Company Commander for a few hours until the surrender.

On Christmas Day a runner arrived at my Headquarters with orders to surrender but word about the surrender had not reached all of the Japanese for we observed a flight of bombers coming towards us and we were very heavily bomber and shelled for about half an hour. When the bombing stopped I discovered that CQMS Tierney had been severely wounded in the back. Remembering our Boy Scout training we constructed a stretcher from two greatcoats turned inside out and buttoned, with poles slipped through the arms, and we carried Tierney down into Wanchai Gap.

The following day the Battalion marched down the Peak to Murray Barracks and on the 30th December we crossed the harbour by ferry to Kowloon. The Japanese then marched us round Kowloon to show us to the populace. It was a long, exhausting and humiliating march, but many Chinese came out of their houses and offered us mugs of water.

Finally we arrived at Sham Shui Po Barracks which was to be a POW Camp for nearly four years. We lived, ate and slept on the floor which was made of poor quality concrete so that our clothes and blankets were covered in fine concrete dust. All I possessed was my uniform and the contents of my haversack: toilet articles and spare shirt and socks, plus two blankets which I discovered in Murray Barracks.

We were very cold sleeping on the concrete floor in January without doors or windows to keep out the wind. I was wearing shorts and long puttees and at night used to wrap the puttees round my body to conserve heat. We were also very hungry. Twice a day we received a small bowl of rice with a little soup or lentils. This gnawing discomfort of hunger, quite unlike the healthy hunger of a person awaiting his dinner, was to remain with us for nearly four years. Soon after arriving in camp I celebrated my twenty-fifth birthday.

We were also ashamed about our surrender and worried about the future for we had heard about the brutality of the Japanese who had tied up and bayoneted soldiers captured during the battle and had shot doctors and raped nurses in a hospital at Stanley.

For the first week or two a bugler would sound the Last Post whenever someone died in the "hospital" hut: but then an outbreak of diphtheria and dysentery claimed many victims, for there were scarcely any medicines, and it was thought politic to abandon the constant bugle calls.

During January and February 1942 we could see columns of Chinese refugees leaving the Colony by the Tai Po Road. There was little work for them and little food, and the Japanese drove out hundreds of thousands. The surrounding countryside in China could not support this influx, and a large proportion of the million refugees died. After the war I discovered that the “No.1 Boy” who looked after us in our peace-time flat had left with the refugees. He survived but his wife and son died.

On 25th September 1942 1816 British officers and men were loaded on board the Lisbon Maru for passage to Japan. The ship was not marked as a POW ship and there were 778 Japanese on board. We were accommodated in three holds lying shoulder to shoulder. At dawn on 1st October the ship was torpedoed by the American submarine Grouper. We were confined to the holds which were battened down with balks of timber covered by tarpaulins and roped down. We were there for 24 hours without food, water, light or latrine facilities. During the night the Japanese troops were taken off leaving only a skeleton guard.

When it became apparent that the ship was going to sink, Colonel Stewart our senior officer, authorised an attempt at a breakout. Lieutenant Howell climbed up a ladder, slit the ropes and tarpaulin with a knife and pushed up one of the balks of timber. He scrambled through the hole followed by some men who removed more of the battens. The Japanese fired into the hold killing one officer. I felt a blow on my shoulder and blood spread down my chest. As we looked up we saw a bright line of water appear at the edge of the hold. It seemed to hesitate and then pour down over us.

Things looked pretty bad but then the stern of the ship settled on a sandbank leaving the bows in the air, which gave us time to get up to the deck. Hundreds of men were in the water and were being fired at from several Japanese gunboats nearby. Others got to the boats and tried to climb aboard but were being pushed back into the water.

It was a lovely sunny day. To the west were some islands several miles away. After some thought I got a hold of a wooden ammunition box, jumped with it into the sea, and started to swim to the open sea in the east, away from the gunboats as this seemed a more dignified conclusion. But a strong tide carried me back towards the gunboats. At this point I heard an explosion and saw the Lisbon Maru finally sink.

By the time I reached the boats the Japanese had changed their policy and were pulling men out of the water. One of them threw me a rope and pulled me alongside. I gave a heave to climb the rope, but to my astonishment nothing happened. I was quite unable to climb the rope which would normally have been an easy exercise. A British officer on board named Walkden lowered another rope which I tied round my chest with a bowline, and he and two other troops hauled me up. We then organised teams of three to pull up others, but many drifted by with their faces in the water.

For three days we were kept on the deck of the gunboat, hungry, cold and wet from the constant rain, during which time more men died. Then we were taken to a railway wharf near Shanghai where we disembarked and were able to take a roll-call. Of the 1816 prisoners only 970 were present, so 846 were missing presumed dead. Of my group of 50 men only 24 survived. During the next few weeks more men died, and by the end of the year there were 724 survivors; 1092 had died.

I returned home shortly before my twenty-ninth birthday in October 1945. Not everyone behaved well in captivity. There were among us thieves, racketeers, selfish people, collaborators, even a few traitors who gave information to the Japanese in return for food and privileges. Those who were not “good in camp”, especially in the civilian camp in Stanley, encountered disapproval in Hong Kong for many years.

But the great majority behaved honourably and with human dignity in conditions which were at best barely tolerable. Some men died in the early days because they lacked the spirit to survive. Many fine men died through neglect, brutality or starvation despite their indomitable will, but men without that determination stood little chance. Some who survived were broken physically or mentally; but most were strengthened by the experience, and became more tolerant, more understanding of the strengths and weaknesses of others, more respectful of the human spirit.